Added by mgrifalconi 9 months ago. Updated 15 days ago.

Original motivation:
While the qem dashboard is agreed to not yet be productive, smelt comments are very useful while doing manual approval of updates.

I would like to have such resource back, at least until https://progress.opensuse.org/issues/97118 #97118 is sorted out.

Updated by mgrifalconi 9 months ago

Raised priority since review becomes more difficult without this feature

Updated by vpelcak 9 months ago

openQA bot was commenting in IBS which lead to massive spam of e-mails.
Besides we also saw opportunities in CI dashboard for the openQA review:
https://progress.opensuse.org/issues/80194 #80194

Therefore some 2 weeks ago we had a meeting - openQA reviewers, Ondrej and me, where openQA reviewers agreed to switch from openQA bot to CI dashboard.
The loss of comments was discussed there as well.

Further usability improvements could be discussed with Sebastian Riedel.

I will clarify before moving on asking the team to conduct work here.

openQA bot was commenting in IBS which lead to massive spam of e-mails.
Besides we also saw opportunities in CI dashboard for the openQA review:
https://progress.opensuse.org/issues/80194 #80194

In particular for the point "openQA reviewers, Ondrej and me […] agreed to switch from openQA bot to CI dashboard" this seems to be in conflict with what you expect from me as product owner for SUSE QE Tools and also what you and others expect from the team SUSE QE Tools. I see a problem not only with the technical impacts described above but also with how such a decision was made. One more reason why I am wondering about such a decision which steps would need to be conducted for any "QAM dashboard" first before continuing such changes which impact the process.

The loss of comments was discussed there as well.

And what are the results of the discussion? I am particularly interested as you know that some people still would like to have "notifications".

So if I understand correctly osukup disabled the schedules for "full" and "incident" tests and instead scheduled them on his workstation manually using https://gitlab.suse.de/qa-maintenance/bot-ng, a personal internal prototype. I would prefer to run "full" tests on qa-maintenance/openQABot again until qa-maintenance/bot-ng is production ready with team responsibility at least after #96998 before we adjust the schedule again. I will ask vpelcak and osukup about the feasibility.

There were no objections from the side of vpelcak and no comment from osukup. In the meantime with #96998 resolved at least the bus factor for bot-ng increased. I have asked lask week in https://chat.suse.de/channel/qem-openqa-review?msg=vuBWpiRhgsJRGqwwj and there was no clear positive nor negative feedback. So I assume we can deprioritize.

Updated by VANASTASIADIS 8 months ago

I agree with okurz on this, there were complaints about the loss of comments from other sides as well, as this leads to the gear icons in smelt not pointing to the existing tests.

Can we discuss about restoring that functionality? If this info exists but in another place (i.e. the dashboard) we should at least provide the link on smelt to make testers aware.

Updated by bschmidt 8 months ago

I'd like to chime in here. The link from https://maintenance.suse.de/ to the corresponding test in openQA was quite convenient as long as it where there. So, please restore or replace the now missing functionality.
Just for reference:
https://suse.slack.com/archives/C02D12FF0H1/p1631087431032900

Updated by osukup 8 months ago

maybe the acceptable solution for this feature request will be https://gitlab.suse.de/opensuse/qem-dashboard/-/issues/15 and then use information from qem-dashboard in SMELT

Seeing the feedback from multiple persons I see multiple problems with the approach that was taken which I see as one more reason to go back to the old approach. I simply do not see the "QEM dashboard" ready yet for production and IMHO the impact of relying on it has not been fully envisioned.

As there were no objections from vpelcak (see #97121#note-10) I suggest again to go back to the old ways for now. Putting back to "Workable" for the team to pick up.

Updated by osukup 8 months ago

Regarding the data in qem dashboard I understood that in case the database would be lost likely bot-ng can push all relevant data into an empty database again. The only bad impact in that case would be that potentially unnecessary reschedules of openQA tests would happen which should be acceptable in case of disaster recovery scenarios.

With this I suggest to go for alternative 3., implementing IBS commenting into bot-ng, with a switch to be able to activate/deactivate. What are the opinions of others? Please state your opinions.

Updated by mgrifalconi 8 months ago

While I still question the hard switch to a new tool that do not cover all the features of the old one, I agree on moving forward instead of rollback.
I have no preference on where I can see the data SMELT or dashboard, as long as it is there (or even better, the bot would be able to process in my place, see https://progress.opensuse.org/issues/97274 #97274).

I would be curious to hear from other stakeholders as well, like other reviewers.

Regarding the proposed solution nr 2. I wonder how notifications can be triggered as soon as tests blocking auto-approval fail as I don't want to rely on humans periodically polling dashboards. Enabling comments sent again would cover that point but maybe I am missing something and there is a better way of pushing the information event-based? Also asked in https://suse.slack.com/archives/C02D16TCP99/p1631607307044800

Updated by cdywan 8 months ago

I wonder if it would be sensible for this ticket to block on #98601 - or alternatively Feedback with an updated Due Date and some idea how to come up with clear ACs. To me it doesn't look "Workable" right now.

no, because this ticket is about "bring back old behaviour", which does not need any more detailed specs.

Right, we did not estimate as such. To make it more clear I now created an urgent subtask #98637 for the specific task to enable IBS comments again, same as we had in before, and let this ticket stay as an epic which can be used to catch more high-level feedback and to answer additional open points.

Updated by okurz 6 months ago

With #98637 resolved we have a feature that allows to send IBS comments and hence emails whenever release requests are blocked from auto-approval due to failing tests. This is an important goal reached. However we did not yet enable this feature to automatically and recurringly send comments yet due to objections.

So I suggest the next step that we try is to only write a single comment per release request whenever either a first blocking failure was encountered or all currently scheduled tests for one release request have finished testing and there is at least one blocking failure. Also in the comment point to the current test results, e.g. something like an https://openqa.suse.de/tests/overview link

Updated by mgrifalconi 4 months ago

No objections on the next steps proposed from my side.

Will get more priority. The important thing IMHO is to at least have 'something' that allows a review of past days and not only the latest one, no matter the implementation.

Updated by cdywan 3 months ago

Being an epic, this ticket has no priority, but existing subtasks were High and we should define new ones at the next opportunity

Updated by okurz 3 months ago

It seems I have new information. Apparently one can customize if or what notifications are sent. On the page https://build.suse.de/my/subscriptions I found 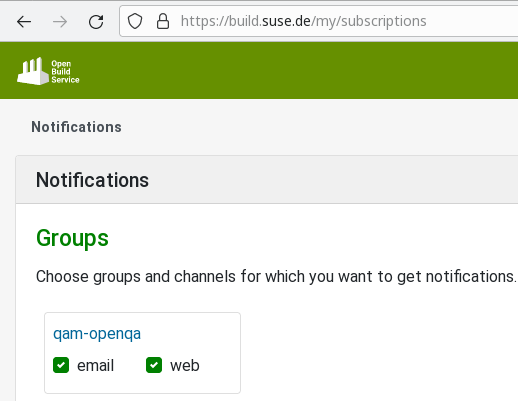 which looks like the exact thing that coolo stated wasn't possible. Well, maybe it is just possible now. So with this I suggest we simply enable the old comments as was implemented and everybody can unsubscribe for the specific group "qam-openqa" based on their individual preferences. Any objections? If not I will ask for the comments to be enabled again after a waiting time of 14 days, that is 2022-03-10.

Updated by cdywan about 1 month ago

So do we want to proceed here? Or has this already been done? Time's up.

Discussed in weekly SUSE QE Tools meeting 2022-04-08. I will announce in some Slack channels that we will enable comments again.

Updated by coolo about 1 month ago

Comment #97121#note-23 asks for "some way" not comments - and the dashboard implements that way now. So what's the point in keeping with the plan to spam the masses?

Comment #97121#note-23 asks for "some way" not comments - and the dashboard implements that way now.

Can you be more specific about what you mean by that? What can the dashboard do?

So what's the point in keeping with the plan to spam the masses?

The point is that we are not progressing otherwise, nobody added test coverage, nobody dares to add a lot of features to qem-bot nor qem-dashboard, people still ask for notifications (not dashboards that need to be polled) and OBS has configurable notifications.

EDIT: Also it was mentioned in https://suse.slack.com/archives/C02CCRM8946/p1649413183546269 "these comments go to all of maintenance team and autobuild team and sle release coordinators as well, not just [qam-openqa], who's members may have good reason to get notifications for all kind of IBS things"

I disabled the comments again in https://gitlab.suse.de/qa-maintenance/bot-ng/-/pipeline_schedules/115/edit after seeing comments from this morning. The feature works not at all as one should expect. For example https://build.suse.de/request/show/268912#comment-3859441 shows

Following the first link I can find 8 scheduled jobs on https://openqa.suse.de/tests/overview?version=15-SP3&groupid=417&flavor=Server-DVD-Updates&distri=sle&build=20220409-1 not 22 failing tests. And there is a huge list of "is waiting" tests that are not even completed yet. Why would we report about that? There should be reports about requests which are not auto-approved because there are tests which failed but I can't find such tests in the above example. And it might be helpful to report that besides any failed tests there are also some which are not even completed at the time of writing but not a long list for each individual job. We should rediscuss expectations and options before continuing.

Updated by coolo about 1 month ago

And compare to https://dashboard.qam.suse.de/incident/23521 giving you a live view on the past days and why they failed for the reviewer to judge if these failures were related to mozilla-nss... which is what #23 asked for.

Updated by jbaier_cz about 1 month ago

Following the first link I can find 8 scheduled jobs on https://openqa.suse.de/tests/overview?version=15-SP3&groupid=417&flavor=Server-DVD-Updates&distri=sle&build=20220409-1 not 22 failing tests.

However there were exactly 22 "is waiting" tests. I would guess, this is because the state is not recognized in https://github.com/openSUSE/qem-bot/blob/master/openqabot/commenter.py#L51 so the bot assumes it is a failure.

And compare to https://dashboard.qam.suse.de/incident/23521 giving you a live view on the past days and why they failed for the reviewer to judge if these failures were related to mozilla-nss... which is what #23 asked for.

Yes, you stated already that in comment 23 - reference as #97121#note-23, not #23 – the dashboard would have implemented something. Can you please explain that in more detail? I don't know what you mean.

Following the first link I can find 8 scheduled jobs on https://openqa.suse.de/tests/overview?version=15-SP3&groupid=417&flavor=Server-DVD-Updates&distri=sle&build=20220409-1 not 22 failing tests.

However there were exactly 22 "is waiting" tests. I would guess, this is because the state is not recognized in https://github.com/openSUSE/qem-bot/blob/master/openqabot/commenter.py#L51 so the bot assumes it is a failure.

Maybe. But it shows that the situation is worse than I expected. Also the main problem I see is that there should have only been a comment at all if the auto-approval is blocked which at that point was not the case because there was not a single real failure that would block auto-approval. We would have needed to wait for jobs to complete before making such call.

Updated by okurz 15 days ago