Added by okurz about 1 month ago. Updated 18 days ago.

On any job (at least observed on openqa.opensuse.org) when opening the job while the job is still in scheduled state, when the job switches to "running" the live view stays blank (white rectangle with no content) like this: 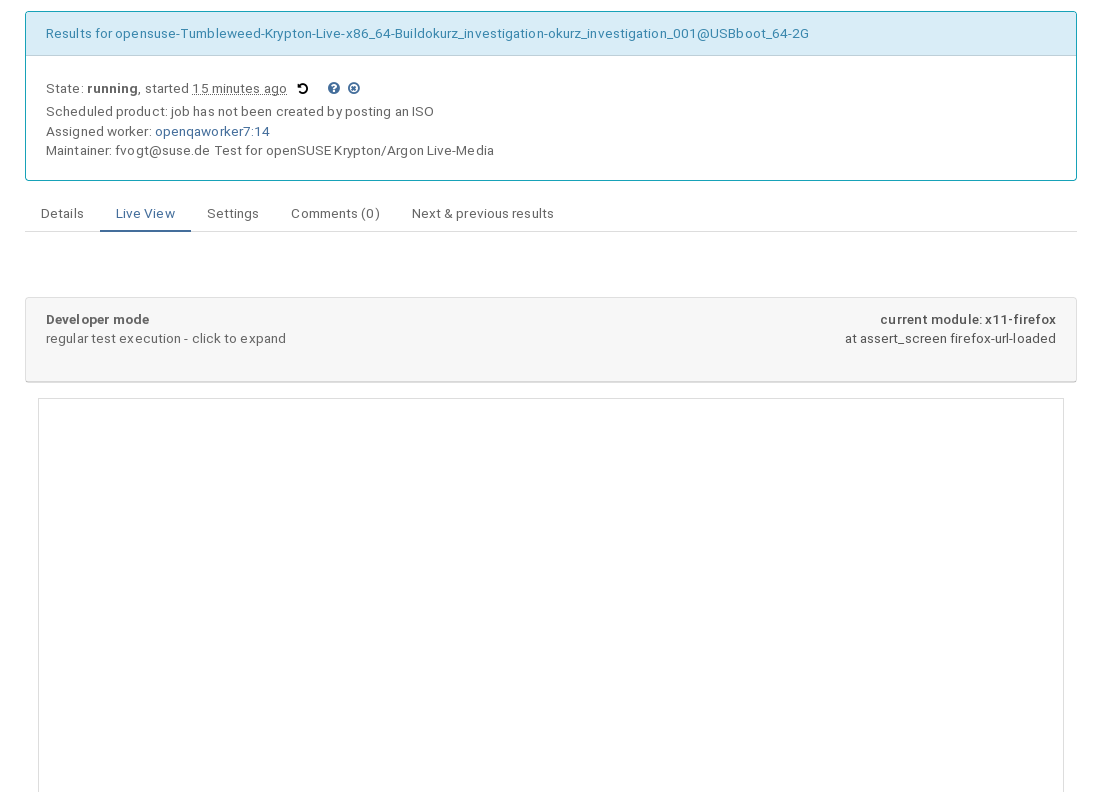 Updated by cdywan about 1 month ago

Updated by tinita about 1 month ago

Just for the record, I don't see the problem locally or on osd, only on o3.
Can't see anything suspicious in the developer tools console / network log.

I cannot reproduce the problem Tina and me saw on o3 with any running job on o3. Note that this problem was also happening with currently running jobs, e.g. Tina sent me the link and the updates also got stuck when I opened the running job on my machine. Currently o3 isn't busy at all.

The workaround "Open the job result only after the job started" implies that there's another case when it is only broken if the job wasn't running when opening the tab. I could also not reproduce that case. Neither on o3 nor locally. Note that it can take a while until the test actually gets started. So a test still shows up as running when the worker downloads assets, isotovideo is launched, needles are initialized and the test schedule is created. That can take a while. Maybe it was just that and the reload was just done shortly before the test was actually starting so it only looked like it helped?

The workaround "Force a refresh of the browser window with "F5"" implies that refreshing would help. That wasn't really the case on the job Tina and me observed. It helped but shortly the job got stuck again.

I'll check again next week when o3 is more busy. Maybe that makes a difference. Once I find a job I'll investigate the workers pool directory and logs.

I've also found a job where the video was disabled (due to max. job time). In this case one also doesn't get a screen. I suppose that was not the case here. I'm just mentioning it because at a first look such a job looks like it would reproduce some of the mentioned issues.

Anybody, feel free to grab this ticket if you can reproduce it. I've opened a few tabs but so far haven't reproduced it.

I could still reproduce it as of today. Do you think it has something to do with my local environment, e.g. Firefox on Leap 15.3 x86_64 or something?

Updated by mkittler 29 days ago

I don't think it is the Firefox version. Since this is about the image and likely also the log I don't think the relevant code requires any too new JavaScript features your possibly outdated browser doesn't have.

If you can reproduce it locally, you could open the developer tools in the tab and check whether anything shows up in the JavaScript console and network log when the job state switches to running.

Updated by okurz 18 days ago