This is the organisation wiki for the openQA Project.
The source code is hosted in the os-autoinst github project, especially openQA itself and the main backend os-autoinst

If you are interested in the tests for SUSE/openSUSE products take a look into the openqatests project.

If you are looking for entry level issues to contribute to the backend, take a look at this search query

The following ticket statuses are used together and their meaning is explained:

It is good practice to update the status together with a comment about it, e.g. a link to a pull request or a reason for reject.

Please avoid the use of other, deprecated categories

Suggestion by okurz: I recommend to avoid the word "bug" in our categories because of the usual "is it a bug or a feature" struggle. Instead I suggest to strictly define "Regressions & Crashes" to clearly separate "it used to work in before" from "this was never part of requirements" for Features. Any ticket of this category also means that our project processes missed something so we have points for improvements, e.g. extend things to look out for in code review.

You can use these templates to fill in tickets and further improve them with more detail over time. Copy the code block, paste it into a new issue, replace every block marked with "<…>" with your content or delete if not appropriate.

As a reviewer of pull requests on github for all related repositories, e.g. https://github.com/os-autoinst/os-autoinst-distri-opensuse/pulls, apply labels in case PRs are open for a longer time and can not be merged so that we keep our backlog clean and know why PRs are blocked.

If you want to help openQA development you can take a look into the existing issues. There are also some "always valid" tasks to be working on:

The following use cases 1-6 have been defined within a SUSE workshop (others have been defined later) to clarify how different actors work with openQA. Some of them are covered already within openQA quite well, some others are stated as motivation for further feature development.

User: QA-Reviewer
primary actor: QA-Team
stakeholder: QA-Prjmgr, Release-Mgmt, openQA-Admin
trigger: every new build
user story: „As an openQA-Reviewer at any point in time I review on the webpage of openQA the overall status of a build in order to track and find bugs, because I want to find bugs as early as possible and report them.“

User: Release-Mgmt
primary actor: Release Manager
stakeholder: Directors, VP, PM, TAMs, Partners
trigger: Milestones
user story: „As a Release-Manager on a daily basis I check on a dashboard for the product health/build status in order to act early in case of failures and have concrete and current reports.“

User: Staging-Admin
primary actor: Staging-Manager for the products
stakeholder: Release-Mgmt, Build-Team
trigger: every single submission to projects
user story: „As a Staging-Manager I review the build status of packages with every staged submission to the „staging projects“ in the „staging dashboard“ and the test-status of the pre-integrated fixes, because I want to identify major breakage before integration to the products and provide fast feedback back to the development.“

User: Bug investigator
primary actor: Any bug assignee for openQA observed bugs
stakeholder: Developer
trigger: bugs
user story: „As a developer that has been assigned a bug which has been observed in openQA I can review referenced tests, find a newer and the most recent job in the same scenario, understand what changed since the last successful job, what other jobs show same symptoms to investigate the root cause fast and use openQA for verification of a bug fix.“

A common definition about the status of a test regarding the product it tests: "false|true positive|negative" as described on https://en.wikipedia.org/wiki/False_positives_and_false_negatives. "positive|negative" describes the outcome of a test ("positive": test signals presence of issue; "negative": no signal) whereas "false|true" describes the conclusion of the test regarding the presence of issues in the SUT or product in our case ("true": correct reporting; "false": incorrect reporting), e.g. "true negative", test successful, no issues detected and there are no issues, product is working as expected by customer. Another example: Think of testing as of a fire alarm. An alarm (event detector) should only go off (be "positive") if there is a fire (event to detect) --> "true positive" whereas if there is no fire there should be no alarm --> "true negative".

Another common but potentially ambiguous categorization:

If in doubt declare a test as "broken". We should review the test and examine if it is behaving as expected.

Be careful about "positive/negative" as some might also use "positive" to incorrectly denote a passing test (and "negative" for failing test) as an indicator of "working product" not an indicator about "issue present". If you argue what is "used in common speech" think about how "false positive" is used as in "false alarm" --> "positive" == "alarm raised", also see https://narainko.wordpress.com/2012/08/26/understanding-false-positive-and-false-negative/

Priorization of work regarding categories¶

In this sense development+QA want to accomplish a "true negative" state whenever possible (no issues present, therefore none detected). As QA and test developers we want to prevent "false positives" ("false alarms" declaring a product as broken when it is not but the test failed for other reasons), also known as "type I error" and "false negatives" (a product issue is not catched by tests and might "slip through" QA and at worst is only found by an external outside customer) also known as "type II error". Also see https://en.wikipedia.org/wiki/Type_I_and_type_II_errors. In the context of openQA and system testing paired with screen matching a "false positive" is much more likely as the tests are very susceptible to subtle variations and changes even if they should be accepted. So when in doubt, create an issue in progress, look at it again, and find that it was a false alarm, rather than wasting more peoples time with INVALID bug reports by believing the product to be broken when it isn't. To quote Richard Brown: "I […] believe this is the route to ongoing improvement - if we have tests which produce such false alarms, then that is a clear indicator that the test needs to be reworked to be less ambiguous, and that IS our job as openQA developers to deal with".

Further categorization of statuses, issues and such in testing, especially automatic tests¶

This categorization scheme is meant to help in communication in either written or spoken discussions being simple, concise, easy to remember while unambiguous in every case.
While used for naming it should also be used as a decision tree and can be followed from the top following each branch.

To keep it simple I will try to go in steps of deciding if a potential issue is of one of two categories in every step (maybe three) and go further down from there. The degree of further detailing is not limited, i.e. it can be further extended. Naming scheme should follow arabic number (for two levels just 1 and 2) counting schemes added from the right for every additional level of decision step and detail without any separation between the digits, e.g. "1111" for the first type in every level of detail up to level four. Also, I am thinking of giving the fully written form phonetic name to unambiguously identify each on every level as long as not more individual levels are necessary. The alphabet should be reserved for higher levels and higher priority types.
Every leaf of the tree must have an action assigned to it.

Priority from high to low: INDIA->OSCAR->HOTEL->JULIETT->…

Proposals for uses of labels¶

With Show bug or label icon on overview if labeled (gh#550) it is possible to add custom labels just by writing them. Nevertheless, a convention should be found for a common benefit. Labels are not anymore automatically carried over (gh#1071).

List of proposed labels with their meaning and where they could be applied.

See the following picture for a graphical overview of the current s390x test infrastructure at SUSE: 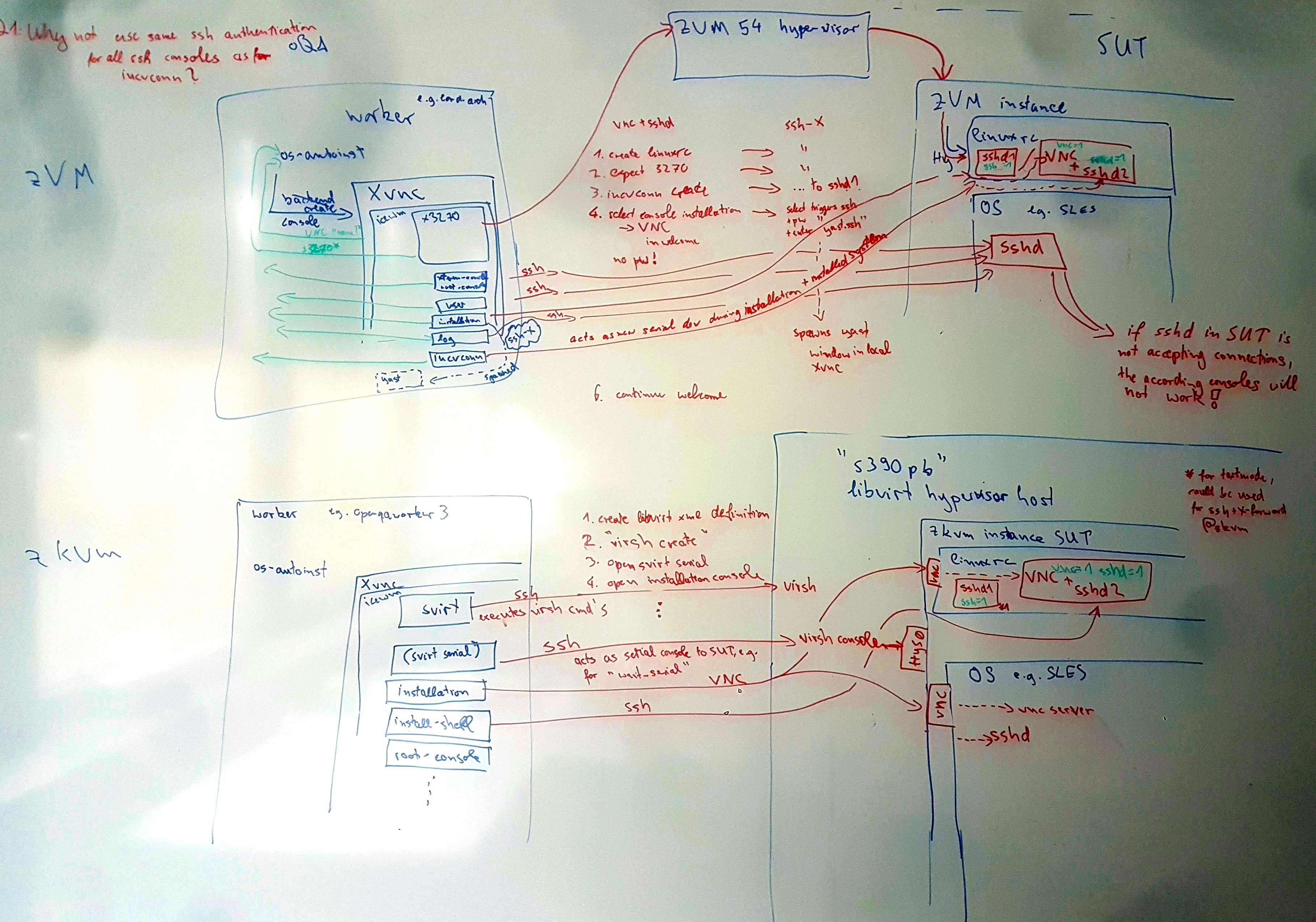 Due to the lack of proper use of hdd-images on zVM, we need to workaround this with having a dedicated worker_class aka a dedicated Host where we run two jobs with START_AFTER_TEST,
the first one which installs the basesystem we want to have upgraded and a second one which is doing the actually upgrade (e.g migration_offline_sle12sp2_zVM_preparation and migration_offline_sle12sp2_zVM)

Since we encountered issues with randomly other preparation jobs are started in between there, we need to ensure that we have one complete chain for all migration jobs running on one worker, that means for example:

There is an ongoing effort to automate the LPAR creation and installation on z/VM. A first idea resulted in the creation of qnipl. qnipl enables one to boot a very slim initramfs from a shared medium (e.g. shared SCSI-disks) and supply it with the needed parameters to chainload a "normal SLES installation" using kexec.
This method is required for z/VM because snipl (Simple network initial program loader) can only load/boot LPARs from specific disks, not network resources.

Moving worker from osd to o3¶