Added by MDoucha about 1 year ago. Updated 11 months ago.

A random problem sometimes appears on aarch64 test machines where the VM screen isn't properly cleared after boot and console output gets drawn over remnants of boot splash screen. Then the job fails because needles don't match. The problem appears less than once a week and job restart usually fixes it but it might be worth investigating further.
https://openqa.suse.de/tests/3773959#step/update_kernel/6

Updated by coolo about 1 year ago

How do you imagine we investigate this? I expect a qemu problem - and all such random qemu problems we filed, just got old in bugzilla.

Updated by okurz about 1 year ago

While I agree with coolo that the fix probability is low I also think that mdoucha picked a valid approach. I prefer having actual issues reported and trying to at least handle workarounds automatically rather than repeatedly manually retriggering jobs :)

I reported https://bugzilla.opensuse.org/show_bug.cgi?id=1160707 and will create a workaround needle referencing the bug. This should be good enough to keep tests running. If the test will be closed without a fix we can replace the workaround needle with a normal needle that is forgiving enough to also accept the distorted screen as usable.

Setting to "Feedback" with due date for myself to check if the workaround needle is effective. 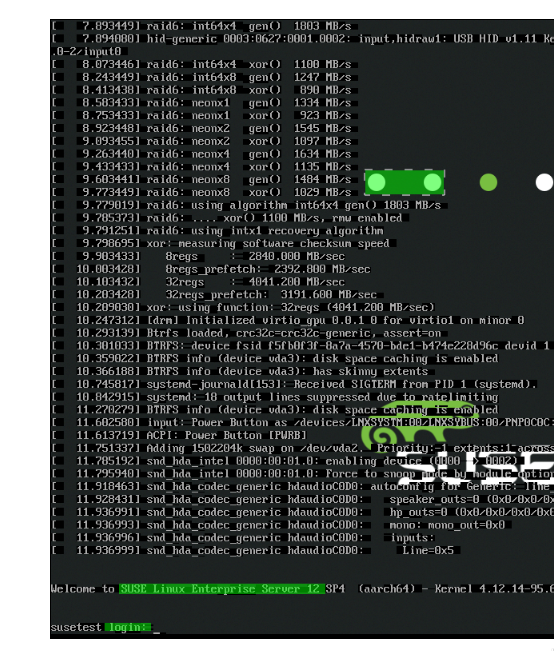 Updated by okurz almost 1 year ago

The needle hasn't matched anywhere yet but is used according to https://openqa.suse.de/admin/needles . As the tests did not fail again in the same step in the original scenario I will resolve this ticket. The bug mentions a potential QEMU patch to fix corruptions though: https://lists.gnu.org/archive/html/qemu-devel/2020-01/msg03545.html

Updated by MDoucha 12 months ago

Updated by okurz 12 months ago

Updated by MDoucha 11 months ago

It looks like creating workaround needles for this issue will be a lot of work.
https://openqa.suse.de/tests/3889963#step/boot_ltp/6

Updated by okurz 11 months ago

Oh, I see. I didn't know that the white circles can be covered by text as well. I assumed the animation would keep a detectable picture in foreground often enough. Ok, created "linux-login-corrupted_boot_screen-boo1160707-20200217" which should be even more resilient.

Updated by MDoucha 11 months ago

Oh, I see. I didn't know that the white circles can be covered by text as well. I assumed the animation would keep a detectable picture in foreground often enough. Ok, created "linux-login-corrupted_boot_screen-boo1160707-20200217" which should be even more resilient.

If this is a VNC bug, there is no animation running in the background anymore when this corruption happens. Then animation ended. The console was cleared with solid black color but the VNC client didn't notice. THEN the text was printed on empty black screen but the VNC client rendered it into its dirty buffer.